How to reach us

Select your way of arrival

The easiest way to get to the island of Krk is by car over the Krk bridge, and by plane in the airport situated close to Omišalj. You can also arrive on the island by ferry from the island of Cres (Valbiska-Merag) and from Lopar on the island of Rab (Valbiska-Lopar).Regular boat connections have not been operational for years, but thousands of tourists come to the island by means of their yachts or organized by larger ships.All coastal towns have extremely well-regulated ports and marinas for the reception of all kinds of boats.

Bus transport for each flight to Rijeka Airport is organized from/to Rijeka, Kraljevica and Omišalj.

Apart from transport provided by buses, you can also arrive at the airport of Rijeka by taxi or by rental car.

Arrival After landing, there is organized bus service of passengers to Omišalj, Kraljevica and Rijeka – Jelačić trg. 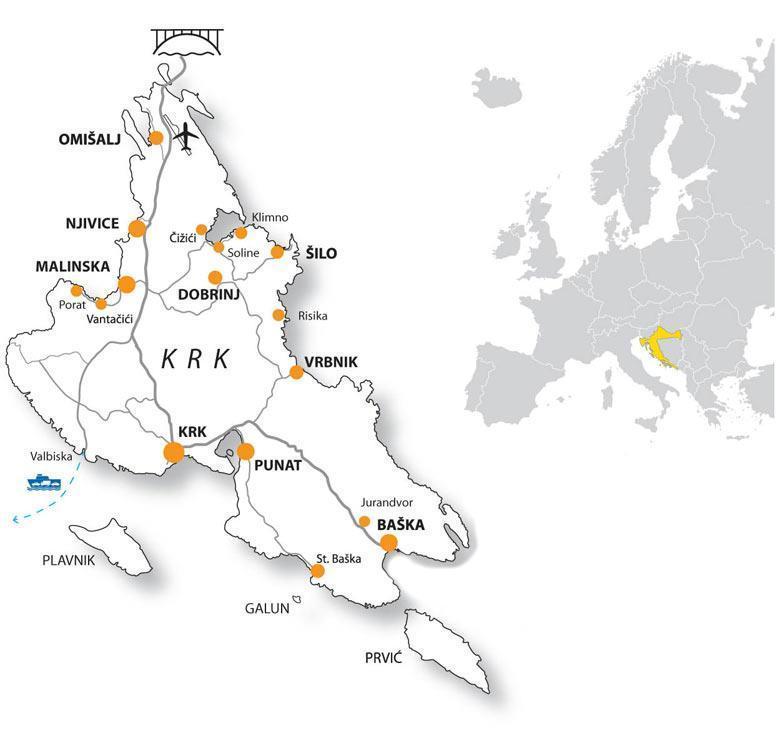 Even if the island of Krk is connected to the land by the Krk bridge, a good connection is also provided to the neighbouring islands of Cres, Lošinj and Rab.That is, from the Valbiska ferry harbour throughout the year ferries depart on the route from Valbiska (on the island of Krk)-Merag (on the island of Cres) and Valbiska – Lopar (on the island of Rab). As the island of Cres is connected to the island of Lošinj by drawbridge, there is also a possibility of visiting and experiencing that island too.Those ferry routes are provided by the Jadrolinija, a company set up for the maritime transport of passengers and cargo with a hundred year tradition. The company was founded on 20th January 1947. as the successor to a number of different companies owned by small shipowners for coastal navigation. Jadrolinija services greatly under the influence of tourism and its main tasks include connecting the islands to the mainland and maintaining a route along the coast on the Croatian part of the Adriatic Sea.

Thanks to its very beneficial geographical position and the proximity of most European countries, the island of Krk has excellent traffic connections. By car you can reach the island of Krk with just a few hours drive.The Krk bridge has greatly alleviated the traffic connection. Construction work began in July 1976, and the bridge was opened for traffic on 19th July 1980. The bridge with its entrance is 1430 metres long. More specifically, the bridge is a concrete arch which stretches from the mainland to the small island of St. Marcus 390 metres long, and at the time of construction, it was the largest bridge of its kind in the world.After opening, in first 20 years, 27,2 million vehicles have passed over it.As well as by car, you can also reach the island of Krk by bus. The island is connected by regular Arriva bus routes.

This website uses cookies to improve your experience while you navigate through the website. Out of these, the cookies that are categorized as necessary are stored on your browser as they are essential for the working of basic functionalities of the website. We also use third-party cookies that help us analyze and understand how you use this website. These cookies will be stored in your browser only with your consent. You also have the option to opt-out of these cookies. But opting out of some of these cookies may affect your browsing experience.
SAVE & ACCEPT
Skip to content